shoushi on architectonictravels stream. not the most iconir shoushi architecture of course. according to the new constitution, it is called republic of artsakh, no ‘nagorno karabakh’ any more.

do you know how the settlement beneath is called? i believe it is Karin Tak (Քարին Տակ) which literally means ‘under the stone’. (: 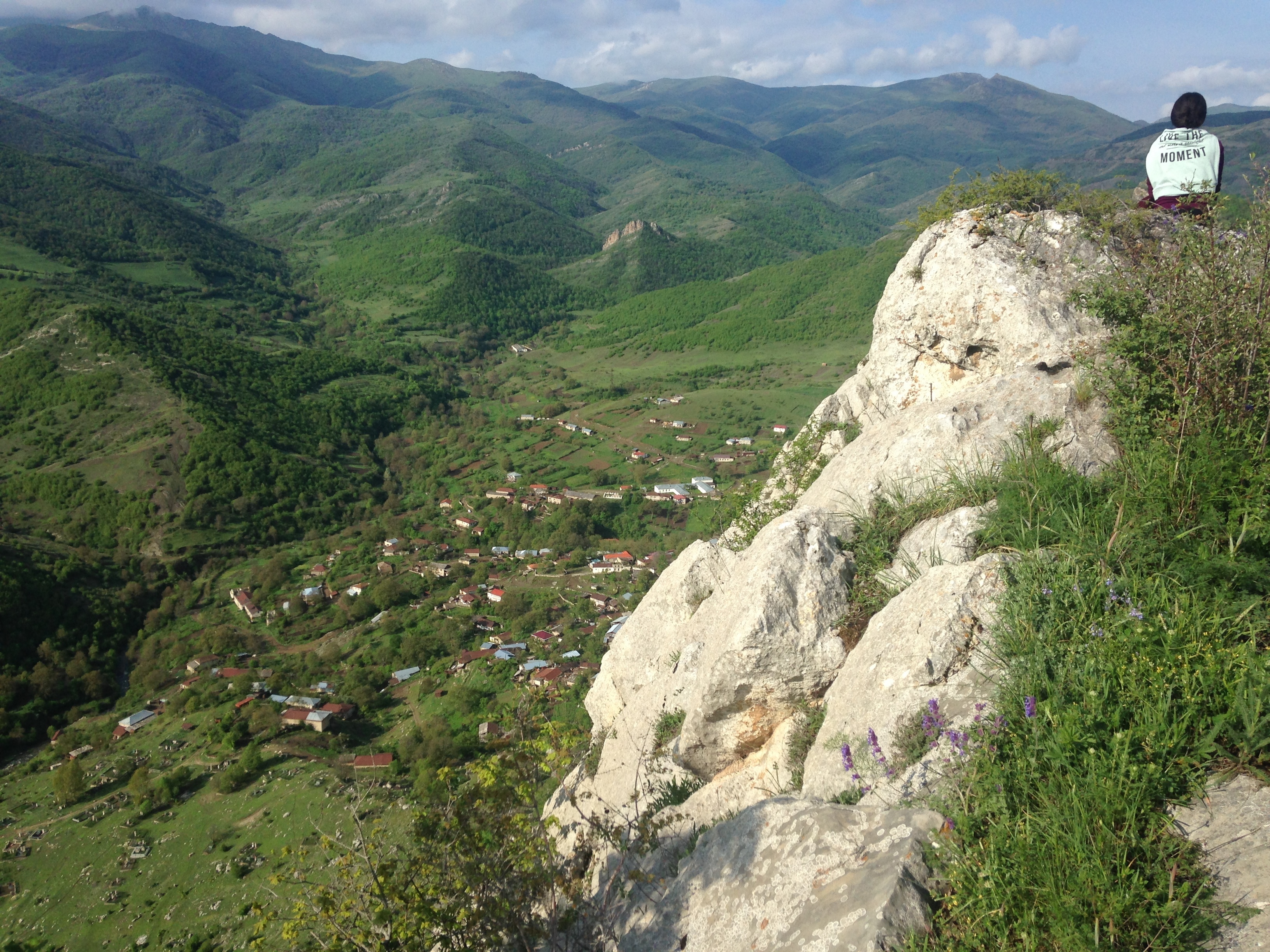 Four weeks into my stay in Armenia, I took a trip to Artsakh with a rambunctious busload of other diasporans. The entire time, I wished I could ditch the group and just explore on my own time. Learn about a history I had, up until that point, simply not known, much less understood. I wished I had more Armenian under my belt so I could take time to talk with the families we stayed with in Shushi, to listen to their stories, understand their pain, their strength.

The morning of our departure, after three jam-packed days of being bussed from place to place to place and back again, we were given the opportunity to go on an optional hike above Shushi, at 7:30am, with just a few hours sleep under our belts. Only nine of us showed up. And during the two hours that followed, we hiked quietly, nearly too tired to talk, up the hills above Shushi. The hills were rich with scads of fragrant, wild herbs. The rocks dropped off dramatically around each bend, giving way to the valley below. After days of rain, the sky was clear, the air crisp, and we stood on the edge of this valley, just taking it all in. The current moment, beautiful, peaceful, and quiet under a morning sun. But also the layers upon layers of history, trauma, fierce pride, reverence, and unwaivering resolve amongst those we met to do whatever it took to keep calling this breathtaking place home.

armenian fortresses served a purpose to defend from the invaders.

thus they were building fortresses at mountain passes.

persian or turkic fortresses were built around the residence of the ruler.

in order to protect him from the local population.

I have accidentally found film photos i have made of these kids and maize in Shoushi, Artsakh. First I did film photos, then to make sure, i have them, the digital one. Then, I had an impression, that film photos have been spoiled and have had published only the digital version. The third photo was made with canon 450d, pentacon 28mm lenses on a crop sensor. I have already published it somewhere on this or my Armenian language stream, I believe. The first two photos are on black and white film, Kodak CFT (which is not a film for photography, but for the medical purposes), and Mamiya-ZE2 with 50mm lenses, and that camera, unfortunately, leaked light.

spyurk.am at the map of diaspora nodes. I wish there would have been one in Artsakh too. Every time I go there we discuss possibilities of running a node with my friends. But it is not easy, internet is less affordable there and quality of life is not high. After all this state is in blockade and in semi-war situation. By the way, this small, but headstrong and freedom-loving nation deserves attention not less than Palestine. Just it’s not as known and “promoted”. I hope they’ll be able to solve all problems and will have their own nodes. (:

To mark the 23rd anniversary of Artsakh’s independence, the Alexander Spendarian Opera and Ballet Theater staged an open-air performance of Avet Terteryan’s Ring of Fire opera in the ancient citadel of Shoushi
http://hetq.am/eng/news/56276/open-air-opera-in-shoushi-marks-artsakhs-independence.htm