inscription on the t-shirt says “the most polite among humans”. it refers to “polite men” or in other words “little green men” used during Crimea annexation.

I saw a machine at the Domodedovo airport, you know those machines that sell sweets and drinks, so there was a machine which was selling t-shirts with putin on them. this kind of t-shirt was there too.

— americans put a lot of effort during these 20 years so that ukrainians hate russia.

— hm, don’t know about america, but in recent years, russia definitely worked in that direction. (:

We caught these policemen who took bribes, and the judge freed them. There is this “collective responsibility” among them. These policemen can now drink somewhere abroad with this judge making fun of us, who tries to fight corruption.

M. S.: It seems that prosecutor’s office continues to practice superintendence functions. In Vilkovo one enterpreneur started to build a ferry way, and he got a mail from prosecutor’s office: provide documents so that we can open a case against you. Do you aware about it?

Prosecutor: No, no such thing. But it fits, in principle, in the prosecutor’s responsibilities.

M. S.: I saw those prosecutors like you. By the way, I saw them in prison later … 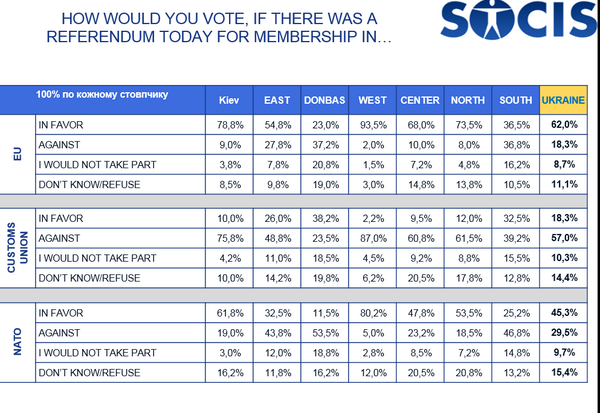 I have translated one of comments from here

I believe it’s not possible to look at the problem of language in Ukraine from the refined point of view.

Let’s ask the question - should you invite relatives to your house? Yes. But what if relatives are thieves? Then you should not. This is the difference between the “refined” and real question.

In the refined way, - two language state and calling relatives for a dinner is a good way, but in realistic way - it’s dangerous.

Thus I would like to stress two problems. Even three.

First - attacks on neighbor states are started from mentioning Russian speaking people. By mentioning so called compatriots - though it’s hard in Russia, after the defeat of USSR. Everybody is compatriot.

And the second question. Isn’t aversion of a language a reflection? Dislike toward Russian was born in Latvia, Ukraine, may be Georgia. Not because the language is bad, but because it serves as Trojan horse.

It is used to ride in, and then bereave of land. Thus, it is necessary to blame not the language, and not play games by using it, as Kremlin is doing, but give up using the language as a mean of taking away the lands. That’s it.

And supplementary question - why nobody worries about language in Asia? Why only Latvia, Estonia, Ukraine, and Georgia?

Why we see that in East European countries, but not in Asia, where it’s stronger?

And the last. Recently, by jesting Klichko, separatists uploaded a video. He makes a slip in speaking.

But I wonder. Klichko, when he was speaking in one of the Kiev schools, speaks great, pure Russian language. And kids can understand him. Ukrainian major, Ukrainian kids, but the language of communication - Russian. That’s even after annexation of Crimea and fire in Donbass.

And then, in the corridors, Klichko speaks Ukrainian, where he’s being “trapped” by separatists.

Can you imagine that any major in Russia can have a talk, even in a Russian village, in Ukrainian language?

Who is more tolerant then?