#define We “Me, and a team of young, talented, enthusiastic people at the Instigate Training Centre”

I write this in English because I think this text may seem interesting not only to Armenian speaking people.

So, there are some rumours in the internets(c) about what Arax operating system is, after all.

Some irregular flashes of information, and then again, silence. This is explained partly by the fact, that we do not have resources to share and PR, and IMHO we need to learn more about the culture of work with the community. And of course, we need community: after all we consider Arax 100% open source initiative.

Arax was mentioned several times, but we still need to uncover a lot of information about it. That’s why I intent to write here (after all, it’s my personal blog) some news, observations, information, and why not, even help requests. Blog is a familiar way for me to communicate with people, so it seems to be a nice idea to start with.

a) People tend to say something like “Armenian Linux”, or “first”/”second”/”ճ-th” “Armenian”… etc…

I personally do not consider Arax as an “Armenian”. When you say “Armenian”/”Russian”/”German” you imperceptibly draw a circle around yourself, and avoid passing through the border. Arax is a river which crosses the borders, and flows in different countries. And we consider Arax as an implementation of somehow different point of view on how to build a decent Linux distribution. Of course, we live and work in Armenia, and that influences our minds, our vision, and the way we work. Details follow. Just want to mention, that during the work we made a lot of contributions to the the upstream vendors of the open source software. This is why people already are able to use some features in other GNU/Linux distributions, like Debian or Ubuntu.

b) We will not try to find ways, whether technical, or legal, to prevent redistribution of Arax.

What does it mean?

It means, that we do not work as traditional leaders in enterprise market.

For instance, you cannot redistribute enterprise Linux made by widely known north American company. In other words, if you have a DVD with that software you cannot share it with friends, and you cannot put it on the internet(s) :). This is not legal.

The only way to redistribute it, is to get rid of proprietary elements, which may actually lead you to rebuild of the whole system and development of something like CentOS.

Now I’ll show you how open source system developers prevent you to copy their software.

We often hear: Linux differs from Windows(tm). You can copy it, and it will work.

Surprise! This is not always true. At least if you try to copy some enterprise Linux system.

It may happen, that you will try to run the copy on the different hardware, for example, on a machine with a different disk controller. There are no corresponding module (driver) in the initrd, and copied system won’t boot. You can say: nice, I will make new initrd. Nice solution, but wait, in order to prepare a new initrd you need a system with exactly the same kernel, i. e. you need to have that dvd which contains exactly the same kernel version, then to boot from it, and only then prepare a new initrd.

So, you need a copy of dvd. Which is not freely downloadable, and redistributable. This is one example, how commercial Linux vendor finds technical ways to prevent redistribution of the open source software.

On the contrary, we tend to encourage redistribution of Arax.

And besides, if you need to make a copy, then just copy Arax to the other hdd, and it will work.

This is a key design feature, and this is done intentionally.

We build Arax kernels in a way, which makes it possible to load them on all supported hardware.

c) We do not exclude components and features from the open source software while building Arax.

For example, RedHat/Fedora kernels lack support of reiserfs file system. Or sometimes, mc is compiled without samba support. Some kernels lack slip support. Whether they consider slip and reiserfs unnecessary, or (it’s nothing personal, just business) they do not want to have one more feature and one more support task – reason doesn’t matter now.

However, Arax kernels include support for reiserfs file system, and even more, they include drivers for Reiser4 file system, which is still not merged to the official kernel tree. Some people claim that reasons are not merely technical, but also “political”. We do not care about politics. We care about technology. We are techno people, and we would like to have all the possibilities delivered by the open source society, by the minds of humanity.

d) Arax is fast. Confession: there is some truth in calling Arax an “Armenian” distribution.

Because a term exists: “developing country”. Um. Actually not only Armenia, or Georgia supposed to be “developing”, but there are much more “developing” countries in the world, than “developed” ones.

What does it mean? It means, park of our computers is old. We often use old hardware.

Is it that bad?

No, if you are able to use fast operating system and software.

Partly, because we do not need to keep compatibility layers, thus are able to stay thin.

And there are different ways to assemble it all together.

Binaries compiled the way, they use instructions which work faster on the given architecture. This is done by assembling the whole system with the exact “-march” gcc compile flag.

Only the most necessary services are enabled by default. This also leads to faster boot process.

It is new, state of the art, fast scheduler, which means, you will never see interrupting mouse movement on you Arax desktop.

Obviously, many companies engaged in Linux distribution construction for the “developed” countries market does not concentrate on the speed. Because modern, fast machines rapidly replace old hardware. But there are people in other countries, who cannot afford often tech refresh. We need faster systems, and that makes us think and find ways to provide more speed at runtime.

Arax is one of the most complete multimedia systems. It contains all possible media codecs out of the box.

This is possible partly due to the fact, that we do not have software patents in Armenia. While most of the Linux distributions built for the American market, they legally required to exclude some multimedia codecs. For instance, it is impossible to listen mp3 music on the such Linux systems out of the box.

It seems to be easy to fix: download couple of codecs to make audacious/xmms/totem to play unsupported media files. But try to add mp3 support to KDE, and very soon you will find yourself recompiling almost everything in the system.

Users do not need to do that.

We make it possible to have all the possible media codecs supported in all the software.

Which includes 3gp, mp3, mpeg2, and even amr files recorded by your phone.

Vishap (installer name is chosen after the Anaconda, RedHat system installer) is extremely simple and fast. It is designed to allow everyone to install complete working system in just a couple of clicks. For the more advanced users, installer sticks to the Arax philosophy “expose everything possible” and that is why it is possible to choose file system (XFS, JFS, ext{2-4}, Reiserfs, Reiser4, etc) and boot loader (GRUB(2), Lilo), etc.

We will also prepare .tar.bz2 and/or .lzma tarballs for those who wants to install system manually.

Arax uses Gentoo’s portage, which is in our opinion, the most flexible infrastructure to build custom distributions. However, we have developed some own software in the area of package management: epkg is a dpkg like utility, and ept-get allows to recoursively remove software, which gentoo portage still lacks.

We have plans to integrate apgcc (auto package gcc wrapper) in order to get rid of bogus library dependencies.

What people often need to do right after installation is customizing and improving the system.

We do our best to minimize that kind of efforts, and we use as much as possible of free software in order to achieve this.

Arax includes dial-up modem drivers, it must present in the system out of the box, because, you need internet in order to download modem driver, it is also possible to use a phone as a modem.

Or, sometimes there are situations, when system is able to find a driver, but it still lacks firmware which is necessary for proper operation of the device.

We completed a list of licenses and firmware, so we can know for sure what exactly are we allowed to redistribute legally, so we can put it in the system to make more hardware just work out of the box.

As it was mentioned before, Arax is a regional river, and Arax system is developed in the region. That’s why we have made contributions, which include, but not limited to: GNOME, XFCE and WindowMaker Armenian translations, they are actually useable in Ubuntu already, local weather reporting in Yerevan, NetworkManager patches, that allow to establish internet connection to VivaCell, Beeline, and Orange 3g providers in a couple of clicks, and without any external software. Yes, we provide upstream patches, so most probably you will be able to see NetworkManager with our patches in the next versions of widely known Linux distributions, such as Debian and Ubuntu. We also include Armenian, Georgian, Persian, Russian (and more) spellcheckers out of the box, and this feature is enabled by default in all applications which support spellchecks. It means, when I chat by writing Armenian letters in the pidgin im window – spellcheck corrects me. Of course it also works in Open Office and FireFox. We’ve also prepared number of Armenian dictionaries, English-Georgian dictionary, we also have preinstalled English, Russian, Persian dictionaries out of the box.

We have nice Armenian, Georgian, Persian, Russian fonts and translations out of the box, we have local bookmarks in the FireFox, including Tarumian.am. We have shortcuts for the easy installation of some software which we are not allowed to redistribute, like ArianAmu font, or AdobeFlash/Opera/Skype, etc.

First office which migrated to Arax was a small branch of a nature conservacy, environmental organization: Rec Caucasus Armenia. We have developed software aimed to simplify migration, for instance MS Office documents batch encoding conversions (armscii-unicode), and replaced proprietary PBX software by writing our own.

We have ready solutions for small and large companies, including common information space implementation, ldap/kerberos authorization, time and print servers, we try to use bleeding edge technologies, and we are testing samba4 already, Parallel NFS, etc.

In the future we hope to have number of specific courses for Arax system administration, software development, and just for users.

I also would like to add, that I have great respect for the RedHat as well as all other open source contributors.

So, this is in short what is Arax about.

Of course, we still have a lot to do, and very limited time and people resources, but we have our vision, our style, and our mission.

It was announced, that Arax will be presented on Digitec’10 in October, and I am looking forward with a mix of fear, agitation, emotion, excitement and fun.

You are kindly invited to the freenode.org IRC channels #arax-os and #arax-dev to get involved and be able to communicate with developers and current users. 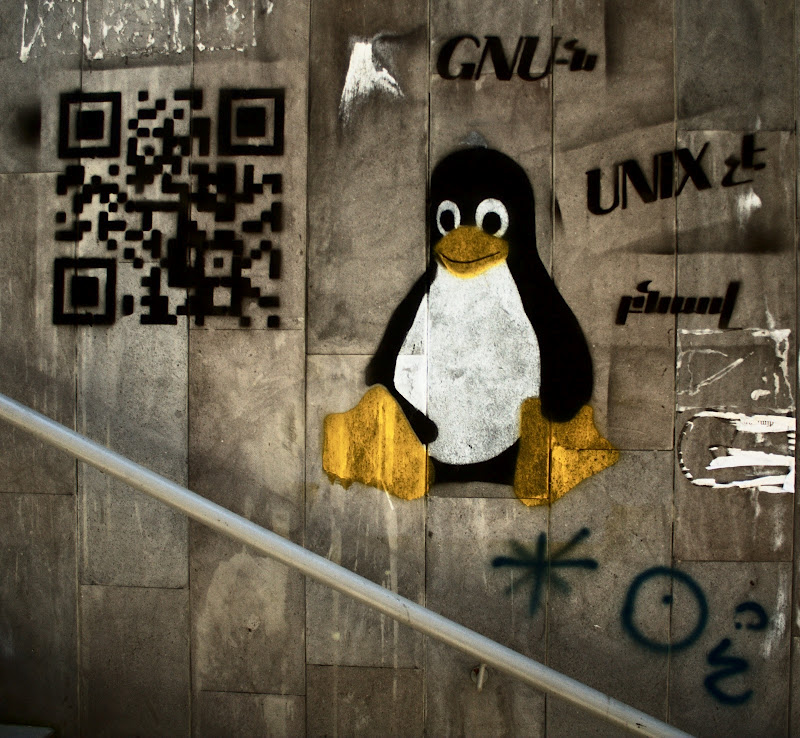