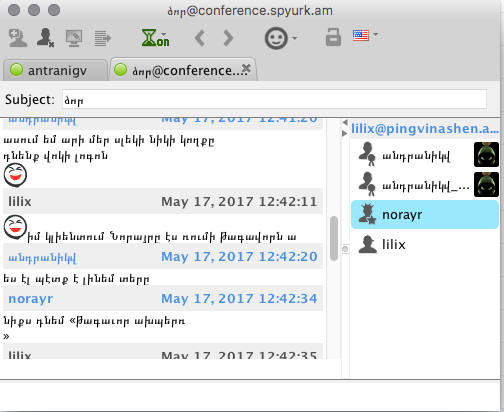 let’s face it. diaspora is loosing in competition with corporate social networks. most of us don’t have our real-life friends here. i am cut from my society, from local political discussions, from cats who live with my friends, because i am not on facebook. that’s a loss. and that’s because diaspora, and other decentralized social networks loose.

we create our own interconnected world, but we lost connection with the other world, most people live in.

and partly because we are doing “marketing” wrong.

who uses diaspora, and what kind of propaganda do we see here most of the times? leftist/anarchist points of view mostly. where is the other part of the society?

I believe, it’s perfectly right thing to have your own server.

If you think you should have a gun, then you also should want to have your own server and encrypt emails.

But we don’t market technologies with slogans like that. And this is partly why we loose. And when we loose, it’s not only about technologies, it’s about ideas. Our ideas fail. That’s why this is important.

P. S. sometimes we gain power. big part of software developers already want to not depend on corporations and prefer using free software for their projects. that’s why microsoft and apple had to open source their development tools. but these are developers. we need regular people to use free and decentralized technologies, and when facebook/google/twitter will change. facebook will adopt something like ostatus, or whatever it be, if he looses users in case he does not. google was using “don’t be evil” until it did not harm it’s commercial interests. so even company which did not want to be “evil” had to become in order to compete. Why? because of us. And because of our wrong marketing.

People don’t get us. They think we are a couple of religious fanatics. Because we behave like them. So they have a point.

@{Antranig Vartanian ; antranigv@spyurk.am} have reminded me about Psi jabber client.

what I like: — it tells you if someone removes you from their roster (contact list). Even if someone removed you from Diaspora aspects and you use Diaspora jabber. (: — if you get a message, it does not appear at your screen in a new window. You just see notification, you have to click on it to get the message. — you can send a message to an exact client of your contact - to the phone or to the desktop. — i love sounds.

what’s missing: — not sure if it’s good or bad that it lacks user avatars. — otr plugin, and probably extensibility.

If there is a resource connected to your gmail.com account called something similar to “MessagingXXXXXXX”, that’s the ‘new’ Google Hangouts (the one that doesn’t play nicely with XMPP). And quite possibly it’s the Android application for Google Hangouts.

So yes, Google Hangouts stays connected even if the device you’ve logged into from is not. Apparently this is a connection that’s created internally, inside Google, from their Hangouts service to their Talk service — from the new IM tech to the XMPP tech. And if you try to trick the XMPP service to sign out Hangouts (for example, by creating a new connection with identical XMPP resource), the Hangouts will happily log back into XMPP in your name and present you as ‘away’. And messages intended to be stored offline will end up in Hangouts, never to be seen again unless you use Hangouts on other systems.

this is howto from Jonne. Podmins, go on! (: